Why 'Fitspiration' is Anything But

on July 22, 2015
Type the hashtags #FitFam and #Fitspiration into your Twitter search box and you'll be bombarded with pictures of half naked twentysomethings showing off their fit, toned bodies post workout. But is this really inspirational or is it just showing off? Does comparing your body to someone else's really motivate you, or does it make you feel bad about yourself because you don't look like that? 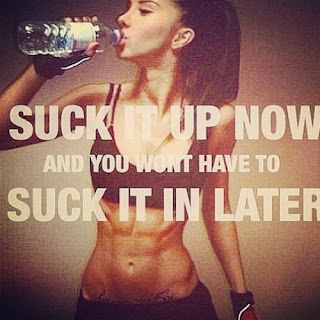 Unfortunately, we live in a society which puts pressure on us to look a certain way. This isn't helped by the mainstream media who publish pictures of skinny celebrities and poke fun at them when they've put on a few pounds.


Fitness has been hijacked by people hellbent on making us believe that exercising is about looking a certain way, rather than feeling a certain way. People prioritise looking good over feeling good – either that or they believe that looking good will make them feel good. But exercise should be about health, not thinness. We should work out because it makes our bodies strong and releases endorphins which make us feel amazing.


I've even noticed this trend on my own blog. I write a lot about nutrition and what certain foods can do for your body, but one of my most popular posts is entitled How to Get a Six Pack. Obviously there's nothing wrong with having a six pack and I can't deny they look great, but it just shows that more people will click on a link that promises them a hot body than one that offers them the chance of a healthy body.

When I'm talking to someone about health or fitness and they mention they're 'on a diet' or 'trying to lose weight', I want to beat them round the head with a carrot stick. They're starving themselves because they care more about being thin than looking after their health. When I try to tell them that no diet is as effective as just eating healthily and getting a little exercise, they look at me suspiciously and take another sip of their Diet Coke. Healthy eating, including lots of fresh fruit and vegetables, and a little cardio mixed with strength training makes you feel great and often has the happy side effect of weight loss. Try it for a month and see if I'm wrong.


I will never understand people who make fun of 'the fat girl' at the gym. We shouldn't be making fun of people at all but it would make more sense if you laughed at someone who was obviously overweight and stuffing their face with a McDonald's rather than someone who is taking charge of their health and actively trying to make a positive lifestyle change.


I love fitness and I want to make it accessible to everybody. It's not an elite club just for young, skinny people to show off their hot bodies and judge others who aren't as thin as they are. It's for everyone – whether you weigh 90 lbs or 300 lbs, if you're 12 years old or 112, you should be interested in your health and looking after your body. It's the only one you'll ever have. Treat it well and it will treat you well.


And stop comparing yourself to those pictures!

What are your thoughts on the current 'fitspiration' trend?

Fitness
This site contains affiliate links. If you purchase anything through one of my links I will receive a small commission at no extra cost to you.