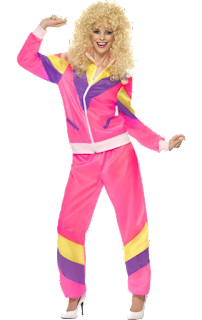 If you were alive in the late eighties/early nineties, you probably owned a shell suit. They were the height of fashion and everyone who was anyone was wearing them. We look back and laugh now, but there was something so painfully cool about shell suits at the time that made them a wardrobe staple for almost every person between the ages of about four and forty.


For any readers who are too young to remember shell suits, Wiktionary explains them perfectly:


Shell suit (noun): A lightweight tracksuit consisting of a matching zip-front jacket and elasticated trousers, each having an outer nylon 'shell', often bearing panels and flashes of different colours and inner cotton lining; popular in the late 1980s and early 1990s both as sportswear and as general leisurewear.


That's right, kids - whether we were working out or not, we actually wore matching nylon jacket/trouser combos with such bright, clashing neon colours flashed across them that everyone walked around with a permanent headache!


Why, you ask? Well, fitness became extremely popular during the eighties, with aerobics and jazzercise being all the rage. Everyone wanted to show off their physical prowess. Leotards and legwarmers looked great on people with a slim figure, but what about the rest of the population? Shell suits were the perfect solution because you didn't have to be skinny to wear them. Whether you were running a marathon or sitting on the sofa eating a Marathon (later to become Snickers), anyone could get in on the action.
With shell suits also being popular in the hip hop and breakdancing scene and Will Smith often sporting one in The Fresh Prince of Bel Air, their uber-cool status was well and truly cemented. It helped if they were oversized and slightly too baggy. No-one would be seen dead in a fitted shell suit – that would just be ridiculous! 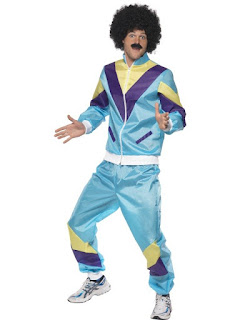 Of course, shell suits were so flammable that they'd never be allowed on the market today. There were many reports of people accidentally setting themselves on fire, especially on Guy Fawkes Night, but even that wasn't enough to stop us all going gaga for their multicoloured goodness.
Shell suits were such a huge trend it seemed like they'd never go away. But of course they did. Almost as quickly as they burst onto the fashion scene, they disappeared. Suddenly they weren't rad, dope, fly or wicked anymore, and anyone still wearing one was a right saddo.


Even though I was a child at the time, I have fond memories of my favourite shell suit. It was the most comfortable thing ever and made me feel just so cool. I wore it pretty much all the time, whatever the occasion. I wish I had some photos to post here and give you all a good laugh. In 2013 the shell suit was declared the biggest fashion faux pas of the past 30 years, but I don't regret mine for a second!


What are your favourite memories from the eighties and nineties? Also, did you own a shell suit? PLEASE describe it to me in the comments!