on September 03, 2015
Instead of a post from me today, here's something a little different. Please welcome Charlotte Waller, a long-distance runner who has completed marathons on all seven continents of the world. Impressive! Over to you, Charlotte:
I was fortunate to complete a round-the-world endeavour of sorts with my Dad over an 8 year period which culminated in November 2013. The challenge was to run a marathon on every continent and - assuming we finished - we’d be the third father-daughter pairing to complete it.

Over a number of years we’d run marathons together in Berlin, Sydney, Chicago, Nagano (Japan) and  Marrakech. This left us with South America and Antarctica which, because of the geography and cost of getting there, it made sense to do in one hit so to speak. Once we’d figured out the logistics, we had a year to train to run two marathons in ten days - one in -25, one in +25. For this reason I began to seek professional input from the physiotherapists at www.backinactionuk.com.

The problems faced were to do with:


a) Rest: Anyone into their fitness knows how hard it is to keep rested whilst training and working a full time job! (I work at a desk but it’s still exhausting)
b) Knees: The Antarctic Ice Marathon would be run on snow with limited visibility, thus meant a lot of tripping side to side and catching my balance. My knees were painful during practice so I was nervous about during the two races
c) Physiology: One of my legs is ever so slightly longer than the other at the femur, meaning I’d be running a bit lop-sided (apparently it’s quite common!)
The course of action I followed after consultation was:
a) Sports Massage: An obvious one but this invigorated me and - more importantly - stopped me training for a day or two as I didn’t want to undo the good that had been done by the massage! It also helped me identify where I needed to focus my stretching which meant I could save money by not needing treatment so often
b) For my knees, although all I wanted to do was run, they instructed me to do some weight work in the gym to build strength in my hips and quads particularly. I was also given a stretch for the IT Band in addition to a general stretching and rolling program.
c) I had no idea but 40% of musculo-skeletal problems can be treated with telephone triage. We hooked up a video and my physio watched me run on a treadmill to look at my gait. She then gave me points to focus on in my running.
I’m pleased to say that despite getting stuck in the Antarctic and nearly missing our second marathon, my Dad and I both got round. I even placed 3rd (albeit out of 12!) in the women’s race. 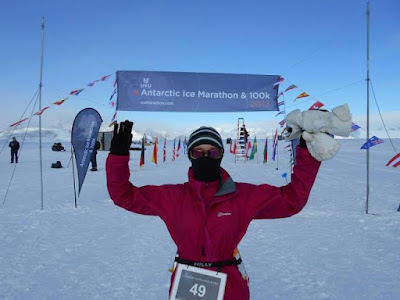 For anyone looking to do a challenge like this or an ultra-marathon, prevention is so much better than cure. In particular I was surprised at how effective phone triage was - even though it seemed odd not to be face-to-face.

Additionally, physio treatment can get expensive. I think you can reduce your chances of needing it by stretching, resting and rolling out regularly.

Thank you to Nic for letting me feature my story on her blog.


*This is a sponsored post.
Sponsored Posts
This site contains affiliate links. If you purchase anything through one of my links I will receive a small commission at no extra cost to you.