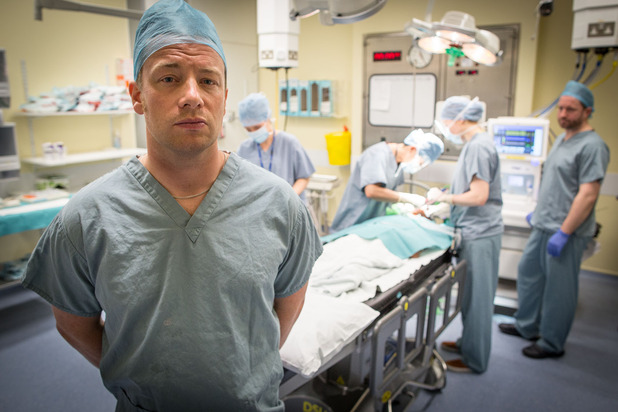 I've been a huge Jamie Oliver fan for years and I always get a little bit too excited when he has a new show out. Last night his new documentary, Jamie's Sugar Rush, was shown on Channel 4 throughout the UK and promoted an extremely important message.


Ten years on from Jamie's School Dinners, where Jamie Oliver campaigned for better food for children in schools, comes Jamie's Sugar Rush. Jamie is now investigating sugar's massive contribution to global health problems such as obesity and type 2 diabetes. As I believe most people are ignorant of just how big this problem is, I salute Jamie for bringing it to the public consciousness. He's well-known and well-liked enough for people to actually sit up and pay attention.


During the programme, Jamie visits a six-year old child who is undergoing surgery under general anaesthetic to have his teeth removed because of his addiction to sugary drinks. He then goes on to investigate how much hidden sugar is in foods most people think of as healthy, such as cereal, fruit juice and bread. Unless you're an extremely health-conscious person, the results may surprise you.


Jamie also visits a middle-aged man who has had a foot amputated due to type 2 diabetes. He discovers that in the UK alone there are around 7000 amputations a year because of this diet-related disease (later in the show, Jamie visits Mexico, which has an even higher number of 75,000 amputations per year). How is this acceptable?


Next, Jamie explores how saturated our society is with sugary snacks. From TV adverts to sweets at children's eye-level in the supermarkets, it's literally inescapable.


In Mexico, as mentioned above, he discovers the problem is much more widespread. Coca Cola is an integral part of daily life and the diabetes problem is much worse. However, a soda tax has recently been introduced which has reduced fizzy drinks consumption by 6 per cent and increased consumption of both water and milk. Jamie decides to start a petition to introduce a 20p per litre 'sugar tax' in the UK too. The extra money raised will be spent on children's food education. I think this is a brilliant idea.


While I readily admit that any review I write of Jamie Oliver's work would be a little gushing, I honestly can't recommend this programme highly enough – I believe everyone should see it. It may just be the wake-up call you need.


Did you watch Jamie's Sugar Rush? What did you think of it?

Reviews
This site contains affiliate links. If you purchase anything through one of my links I will receive a small commission at no extra cost to you.