My Fitbit: Three Months On 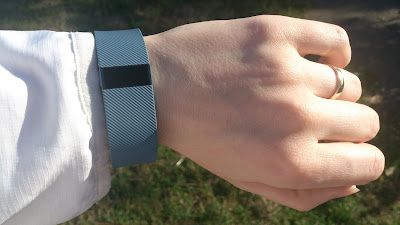 This post contains affiliate links. If you buy anything through one of my links I will receive a small commission at no extra cost to you.

Back in July I bought a Fitbit Charge and reviewed it on here after using it for a few weeks. But I think a review written after just three weeks is still about your first impressions so, as I'm still wearing and using my Fitbit, I thought I'd write another post about how I'm getting on with it three months down the line.


My main concern was the accuracy – it was counting steps when I was just using my hands and not actually walking or running. Well, it still does that. I've just accepted the fact now and only take it as a rough guide. I do like the way  the Fitbit vibrates on your wrist when it hits 10,000 steps – for the first few weeks it'd startle me because I wasn't expecting it, but once I got used to it I actually started looking forward to it.


I still like the sleep tracker, although I'm not using it as obsessively as I was at the start. In the beginning I'd get up every morning, log into my online account, sync my Fitbit and check how I'd slept. Now I'm only really doing that when I think I've slept particularly well or badly.


I don't need to charge the Fitbit very often; probably only about once a week max, which is a plus. I enjoy the little messages it displays when it's finished charging. Off the top of my head I can remember it saying “I'm ready”, “Vamos” and my favourite: “I like U”. Aww thanks, Fitbit.


To be honest though, these days I'm mostly just using it as a watch, with the occasional glance at my step count and sleep tracker. If I could go back in time and re-buy the Fitbit Charge, I'm not sure I would. It's fun to try and beat my step count every day and I enjoy when people ask, “What's that thing on your wrist?” but apart from that, I could live without it. Saying that though, now I have one I'm not going to stop using it for a good while yet.


Do you have a Fitbit or other type of activity tracker? Would you ever buy one?


Read my first Fitbit review: The Fitbit: Is it Overrated?

Reviews
This site contains affiliate links. If you purchase anything through one of my links I will receive a small commission at no extra cost to you.