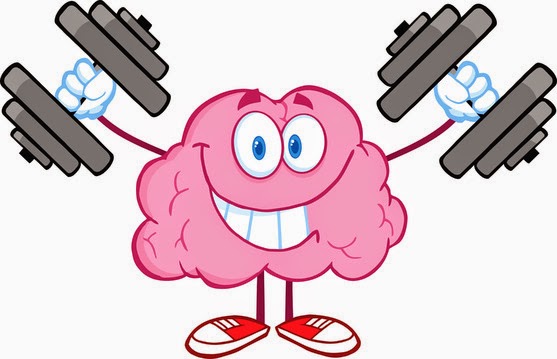 We like to keep our bodies in shape by eating the right foods and exercising regularly. But sometimes we forget to take care of our mental health. The brain is the most important organ in the body and needs just as much care and attention as we give to all the others. So let's find out how to keep our grey matter in peak condition.
What to Eat
The number one way to nourish and protect the brain is to eat the right things. Brain-friendly foods include:

1. Good fats. Studies show that omega-3 fatty acids, found in oily fish such as salmon, mackerel, trout and tuna steak, possess anti-depressant properties. They can also slow down age-related loss of brain volume, particularly in the hippocampus, which deals with cognitive function and memory. Omega-6 fats, found in olive oil and most nuts and seeds, play an important role in cell growth and so are vital for brain development.

2. Fresh fruit and veg. Berries in particular, such as blueberries, blackberries and strawberries, are rich in vitamin C and have high levels of antioxidants, which help to boost brain function and have been shown to guard against short-term memory loss. When it comes to vegetables, different coloured veg offers different nutrients, so try to 'eat the rainbow' to receive maximum benefit from all the possible brain-friendly vitamins and minerals.

3. Green tea and water. The brain is made up of about 75% water so it's vital to keep it hydrated. Water improves every single bodily function, including quick thinking and focus. Green tea contains properties which studies have shown could slow down the progress of dementia, such as Parkinson's disease and Alzheimer's. Drink up to four cups of green tea a day, without sugar.

4. Saturated and trans fats. Sat fats are found mainly in animal products so a diet high in these can interfere with neuron function, contributing to Alzheimer's disease later in life. Trans fats are really bad news as they are man-made and especially harmful. They destroy cells, including brain cells, and have been known to deplete the body's stores of omega-3 which we've already discovered is crucial for cognitive function. Always check the packaging and steer well clear of anything labelled 'hydrogenated' or even 'partially hydrogenated'.

5. Processed and junk foods. These can contain huge amounts of chemicals and toxins, which play havoc with your brain and cause everything from poor concentration to certain types of cancer. But you'll be pleased to know that it's fine, and even recommended, to eat chocolate! A few squares of good quality dark chocolate (at least 70% cocoa solids) can boost blood flow to the brain for up to three hours, improving your alertness.

6. Alcohol and energy drinks. It's well known that alcohol abuse kills brain cells and can lead to all sorts of mental problems. However, even moderate drinking causes short-term brain impairment so it's best to lay off the booze altogether. And you may think that energy drinks are good for your head as they improve your alertness and concentration for a short period of time. But the large amounts of caffeine and sugar they contain can also lead to nervousness, anxiety, insomnia, nausea, dependence, heart palpitations and potentially even death if you overdose on them.

What Else to Do
There are a few other ways to keep your grey matter in optimal condition. Make sure you do these things as often as possible:

7. Get enough sleep. Sleeping is crucial for the brain to rest and regenerate itself. A sleep-deprived person will not be able to perform mental tasks involving focus, concentration and creative thinking as well as someone who is well-rested. In the long term, sleep deprivation has been linked to psychiatric problems and even stroke. Eight hours of good quality slumber is what you should aim for every night.

8. Exercise your brain. Watch less trash TV and read more books. Anything intellectually stimulating, such as reading, writing or doing the crossword puzzle, will reduce the likelihood of age-related brain atrophy. Never stop learning. Practice memory exercises, take a course to learn a new language, be curious about everything around you and ask questions, like a child. Don't let your brain be idle.

9. Exercise your body. Exercising releases feel-good chemicals called endorphins which combat depression. And did you know that the brain starts to lose nerve tissue from the age of just 30? You can slow down this process by doing at least 20 minutes of aerobic exercise three times a week. This will create new neurons and reinforce neural connections in the hippocampus which will improve your memory and academic abilities.

The human brain is nothing short of a miracle and more things are being discovered about its power every day. One thing is certain: without your brain you wouldn't exist. So look after your brain, and your brain will look after you!

Follow Me!
BlogLovin' | Twitter | Instagram
Mental Health
This site contains affiliate links. If you purchase anything through one of my links I will receive a small commission at no extra cost to you.