Why 'Teatoxes' Are a Rip-Off 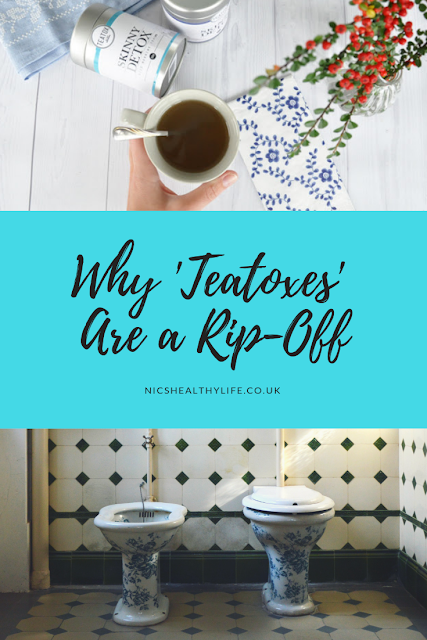 Detox teas, AKA 'teatoxes', have been all the rage for a couple of years now and are becoming a popular weight-loss method for people trying to 'cleanse' their bodies and 'restore natural balance' after a bout of indulgence. This is why they are heavily marketed in January, although they're available year-round.

Many people, feeling bloated and lethargic after the excesses of Christmas and New Year festivities, fall victim to their claims of helping you to lose weight and look great. Well, who wouldn't jump at the chance of something which promises to increase your metabolism, burn calories and fat and aid in food digestion while suppressing your appetite and improving your skin? That sounds too good to be true! (Spoiler: it is).

I've been asked once or twice if I'd like to review/promote certain companies' teatox programmes on my blog and social media, and I've always refused. Whether they're branded 'detox tea', 'skinny tea', 'fit tea', 'flat tummy tea' or whatever else tea, they all seem to offer a miracle cure which they ultimately can't deliver. After all, there's absolutely NO scientific evidence to back up any of the supposed benefits.

First of all, you have to eat a very low-calorie diet as well as exercise at the same time as drinking the tea if you want to see results. They don't advocate sitting on the sofa, eating chocolate and expecting to lose weight. However, eating a low-calorie diet will cause you to lose weight by itself whether you drink herbal tea or not. But any diet plan which offers you a quick fix is not going to be sustainable in the long term. All you will achieve is to mess up your metabolism and as soon as you start eating normally again, you'll gain all the weight back and then some.

Also, you don't need to drink tea to 'detoxify' or 'cleanse' your body - you have a liver for a reason. One company even goes so far as selling both a 'daytime cleanse' and a 'bedtime cleanse' so you have to buy TWO packs of their product - I'd say you couldn't make this stuff up, but apparently someone did (and is now making a lot of money from their idea!).

A prominent ingredient in most detox teas is the senna leaf - a non-prescription laxative which irritates the stomach lining and can lead to cramps, dizziness, fainting, vomiting, diarrhoea and dehydration. Most people lose a few pounds after a bout of vomiting and diarrhoea, but as it's just water weight and not fat that has been lost we quickly regain it as soon as we start eating and drinking properly again.

Using a teatox for more than fourteen days can cause abnormal bowel function or changes in electrolyte levels that can lead to heart problems, muscle weakness, liver damage and other harmful effects. Why would you want to risk that?

So, what's the best way to lose those extra pounds and give yourself more energy? I'm sure you know my answer...good old healthy eating and exercise. Unfortunately there is no quick fix - there never has been and there never will be. Drink plenty of water, eat a varied diet rich in fruit and vegetables, work out at least three times a week and go to bed at a reasonable hour. Don't buy into any of these trendy diet fads - spend your money on something useful.

Have you ever tried a 'teatox'? What did you think of it? Let me know in the comments!