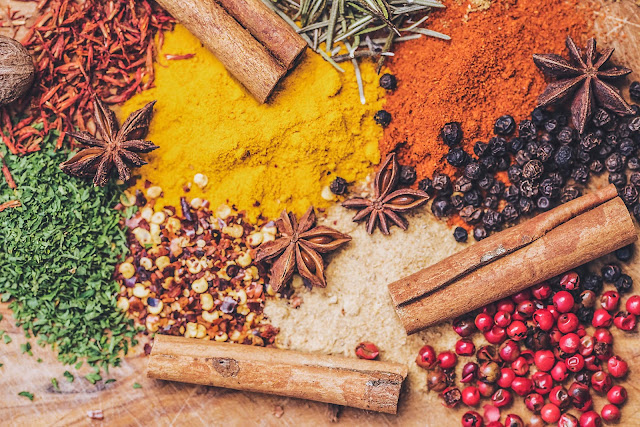 As the weather cools down, we start turning to more warming foods to keep us satisfied – suddenly salad just doesn't hit the spot anymore.

Some spices just seem to scream autumn and can pretty much transform your food from bland and tasteless into a fall feast. Here are seven of the best to keep in your kitchen:

(This post contains affiliate links. If you purchase anything through one of my links I will receive a small commission at no extra cost to you. Thanks for your continued support.)

This popular spice works well in both sweet and savoury dishes, from pumpkin pie to Moroccan tagine. It's at the top of my list because it's used widely during the colder months and is definitely an autumn staple as far as spices go.

It's great for your blood – by adding it to your food you'll be helping to regulate your blood sugar and lower LDL (bad) cholesterol. It's also a powerful anti-clotting agent.

Like cinnamon, nutmeg complements a variety of dishes, whether sweet or savoury. From cakes to curries to sauces, it's a very useful spice to have in your pantry.

An antibacterial, nutmeg can kill cavity-causing bacteria in the mouth as well as aid digestion. However, it should be used in moderation and avoided if you're pregnant or breastfeeding. A pinch or two is a safe amount to add to your autumnal dishes.
3. Ginger

Tea, biscuits, cake, beer, bread...you can put the word 'ginger' in front of all of these. This spice is very versatile, and so good for you.

Ginger helps to increase blood circulation, aid digestion, reduce pain and inflammation, fight colds and flu and is an effective remedy for nausea – it's been well known to ease morning sickness for centuries.
4. Cloves

These can be used to liven up savoury dishes such as stews and curries but also go very well with fruit – try adding a few to an apple crumble for a little extra taste.

Health-wise, they help to reduce inflammation and are a natural painkiller and anaesthetic, especially good for toothache. You know that funny tasting liquid the dentist gives you to swish around your mouth at the end of your appointment? That's made with cloves, because they have a slight numbing effect and therefore help to reduce pain.

Turmeric is traditionally used in curries and savoury recipes, and manages to turn every dish its signature bright yellow colour.

It also has a long history of medicinal use. The active ingredient in turmeric is curcumin, a compound which has powerful anti-inflammatory effects and is also a strong antioxidant. If you want a quick and easy way to get turmeric into your diet, try this turmeric latte recipe.

Another spice commonly used in curries and stews, cumin promotes digestion, helps to improve cholesterol and is a rich source of iron. If cooking with the seeds rather than the powder, toast before use to release their aromatic flavour before adding to dishes.

You can also receive the benefits of cumin by making jeera water: simply steep a few cumin seeds in boiling water and allow to cool before drinking.

This is not, as some people believe, a mixture of spices, but the dried, unripe fruit of the pimenta dioica plant. It's called allspice because it seems to combine the flavours of cinnamon, nutmeg and cloves, and therefore can be used in place of any or all of these.

Allspice is an anti-inflammatory and can also be used to fight infections and treat gas and bloating. It's a good all-rounder!

What are your favourite fall spices and how do you use them?

Subscribe to my mailing list for freebies and updates
Autumn Nutrition
This site contains affiliate links. If you purchase anything through one of my links I will receive a small commission at no extra cost to you.