Ten MORE Unusual Things About Me 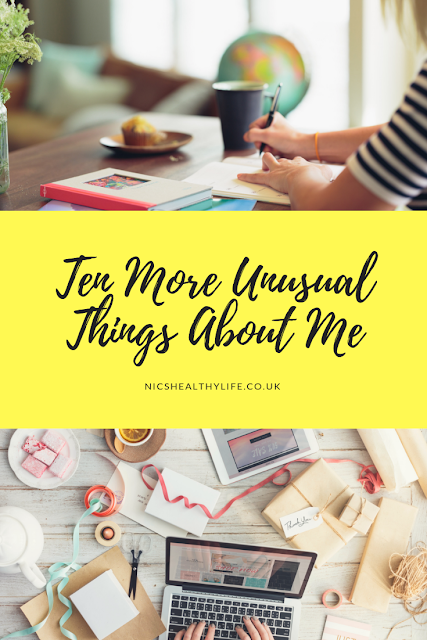 I recently wrote a post entitled Ten Unusual Things About Me which went down pretty well - a lot of you liked it and even wrote your own posts, tagging others to do the same. I really enjoyed reading others' posts and learning some unusual things about everyone.

Since then, I've kept coming up with other funny facts about myself and thinking I wish I'd put that in the post! So I've been noting them down until I had another ten and have now put them all into a new post for your amusement.

Are you ready to learn ten more unusual things about me?

1. My first word was "Asda". For those who don't know, Asda is a supermarket chain in the UK. My dad used to be a manager there when I was little and my mum would take me to pick him up after work so I used to demand, "Asda! Asda!" whenever I wanted to see my dad (I don't know why I didn't just say "Dad", but y'know).

2. When I was about three years old I wanted nothing more than to be a Care Bear.

3. I write with my right hand but do pretty much everything else left handed. I don't know if that means I'm ambidextrous or not because I can't write with my left hand (not well, anyway).

4. I've travelled a lot but have never suffered from jet lag, even after long flights. I'm a really nervous flyer, though.

5. I've had the same hairdresser for the past 15 years because she always does my hair exactly how I want it. I actually drive half an hour from my house in London to her salon in Essex (where I used to live) because I don't trust anyone else to do it.

7. I passed my driving test at the age of 21. I passed the theory first time but had to take the practical test five times because I failed the first four.

8. I had my wedding reception at the Boleyn Ground - the old football stadium for West Ham United - which has since ceased to exist.

9. I love cooking and dream of having a big farmhouse kitchen with a range, an island, a larder, wooden beams everywhere and a cat curled up by the log fire.

10. I don't even know why there's a cat in my kitchen daydream as I'm more of a dog person.

What's the most unusual thing about you?

Subscribe to my monthly newsletter
Tags
This site contains affiliate links. If you purchase anything through one of my links I will receive a small commission at no extra cost to you.